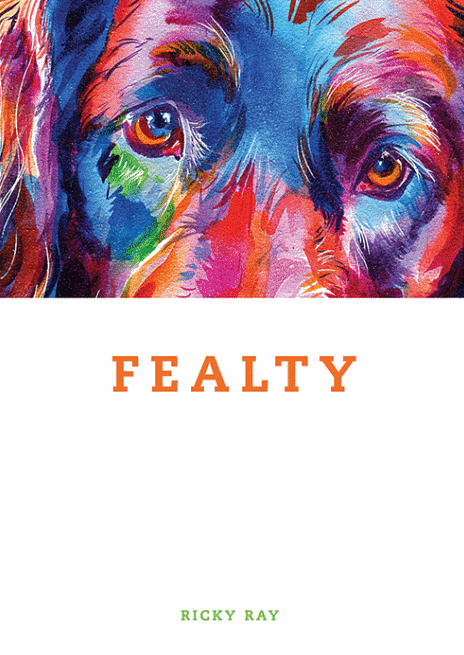 Ricky Ray’s poetry collection, Fealty, was originally published in 2018 by Eyewear Publishing, and is being published in 2019 by Diode Editions. The collection, featuring seventy poems, touches on numerous themes. These include that of human compassion for nature, relationships (good and bad), and an overriding desire for progress and improvement.

One theme that spans the collection is one of deep-rooted humanity. The poem, ‘On Compassion’ is a standout example of this. I wish I could quote the whole poem, but you’ll have to buy the collection to read it in its entirety! The true humanity of the poem comes in the narrator learning from his companion and their shared compassion for a helpless animal. The poem tells a narrative of a man and a woman who find a dead bird and the women insists, ‘we have to help.’ The narrator doesn’t understand how to help something dead and writes, ‘so I waited for her to show me.’ The two proceed to bury the bird and Ray captures the proceeding in such a down to earth, rustic, true to life way that is truly beautiful to read:

and a man and a woman

placing flowers on the body

and the roughly mounded soil,

bowing their heads not in prayer

but in homage of this life

where he fell in love

to live beside her.

Fealty features other, similarly touching moments that involve individuals coming to the aid of animals in trouble. These, especially, ‘On Compassion’ and, ‘The Bird’ have the power to bring a tear to the reader’s eye (as they did with mine!) for Ray captures such warmth of feeling intertwined with a gentle sadness.

That said, many poems depict Ray’s dry sense of humour which also makes these poems a delightful and entertaining read. Matter-of-fact statements are at once true and comical in the abrupt understanding Ray is able to communicate to his reader. In the Fortnight Poetry Prize winning poem, ‘Seven Hundred Sights in a Horse’ Ray writes:

A wild horse ran through town.

It was always running.

Gospel was: something had

to be wrong with you to see it.

Everyone had seen it.

Some lines, I hope were meant to be funny, but maybe weren’t to my taste. For example, in ‘Note with the hand I sent you’:

with plenty of boob to feel

and it’ll gladly help you

when the rest of your hands are full.

Whilst the poems I have referenced so far have all been in free verse, Ray’s occasional use of rhyme is carefully employed and deliberate. Moreover, a number of poems in the collection are prose poems. These often take an interesting form. For example, as the name suggests, ‘Two Postcards to Myself from April 1, 2017’ is exactly that, and the humour returns in the line, ‘This is taking two postcards because you are so longwinded.’ A second epistolary poem is ‘Music as it is’ which begins, ‘Dearheart: forgive the extreme tardiness of my reply -’. This poem holds some truly beautiful lines:

that we’re nearly always late to or altogether

missing the meetings set up for us by our desires,

and thereby run around on the stringy detritus

of what could have been.

The focus on what could have been is also a theme in other poems, in ways that can be both uplifting at times (as in ‘Regeneration’) and heartbreaking and tragic at others (as in ‘Late Night Possibilities’). In the poem, ‘Something we were supposed to do’ near the beginning of the collection, Ray writes, ‘We live longer / and call it progress’ thus suggesting there is more to progress than this. Similarly, in ‘The Word Want’ Ray highlights the desire for betterment. The poem begins with ‘the things we don’t want.’ He writes:

We don’t want a dichotomy

that splits us into boys and girls

who don’t fit the picture perfect.

Moving onto his notion of progress, he describes how:

We want a language of the grey area

where acceptance is a prerequisite

and is thus rendered a meaningless fact.

we want the disabled to show us

what we don’t know about ourselves,

what hellfire slumbers in that fleeting twinge.

In keeping with this, the final poem of the collection, ‘Regeneration’, opens with the lines, ‘Rising from the wheelchair / my legs hold me up-’.  The imagery throughout the rest of this poem serves to tie the progress the narrator has made with nature in its strongest forms. It is a wonderful end to a collection that conveys the power of humanised understanding and compassion. Through the lens of nature, Ray explores love, learning, and compassion as the cornerstone of progress. The reader follows this progress throughout the collection and will likely be left with a desire for such progress to continue beyond the final page.

You can pre-order Fealty here.

Beth O’Brien (she/her) is a third year English Literature student at the University of Birmingham. She has published poems with Foxglove Journal and Nine Muses Poetry, and is a reviewer for Mad Hatter Reviews.She has also written articles for sheswanderful.com and the Graduate Recruitment Bureau blog.