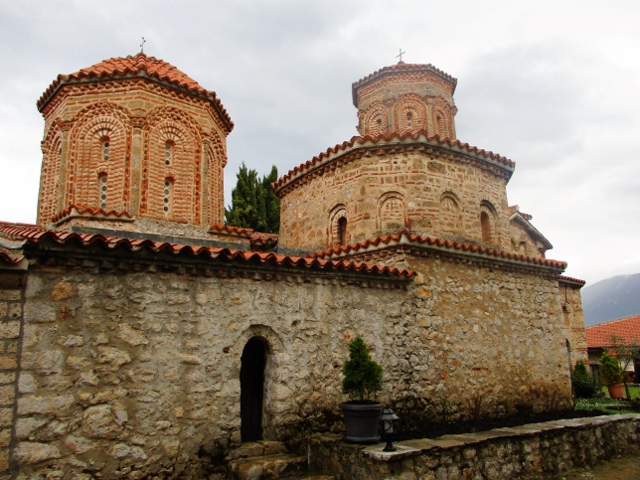 My partner, Ion, and I had been travelling for more than two years now. On a tight budget. The bus ride from Ohrid to St Naum’s Monastery was agreeably cheap, but paying for expensive meals, and the use of a toilet, did not augur well. 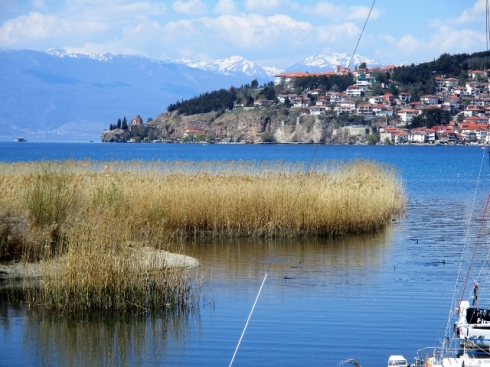 We’d been told St Naum’s was a beautiful place by Lake Ohrid, in Macedonia (FYROM). We planned to have lunch there, maybe a cheap börek. These delicious savoury pastries had become an addiction, especially the ones filled with cheese. But there was no börek to be found. Only jewellery shops, a small general store, and a few touristy restaurants. Meaning money.

I knew shouting a meal was not a great option. It was only a temporary measure to divert attention away from the cash slipping through our fingers. Ion’s notepad followed us wherever we went; it would be documented in our budget anyway.

Ravenous, we agreed to a restaurant. Ion immediately scoffed at the prices. I felt annoyed as we hadn’t packed our usual ‘emergency sandwiches’. An uneventful meal came and went. After a quick skim of the coffee menu’s prices, I suggested one elsewhere.

Hand-in-hand, and no longer starving, we relaxed and walked across the manicured grounds overlooking the lake. The day was cool and the water a misty grey. So quiet. And undisturbed. It felt like a new start. We headed back towards the general store. I’d noticed a coffee machine earlier, which would save us a few denars.

As luck would have it, some money was left in the machine. Our first coffee ended up free. Our second cost only ten denars. About twenty-five cents.

Ion laughed and suddenly it began to rain. We quickly took shelter under the store’s awning. Sipping hot coffee from small paper cups somehow seemed perfect. We sat back on plastic chairs and savoured the gentle sound of rain, the freshness, and the sweep of the lake.

In good spirits, we raised our umbrellas and headed towards the monastery. A light shower brightened the surrounding vegetation to a phosphorescent green. The holy spring waters nearby were crystal clear. A few children in a rowboat glided quietly along its surface, their young minds silenced by the peace of nature.

Entering a huge old wooden gate, we finally came to the church of Sveti Naum (St Naum). Peacocks and peahens, considered symbols of Christianity, roamed the cobblestones. A spread of glorious feathers announced our arrival. We heeded the warning and dashed past. 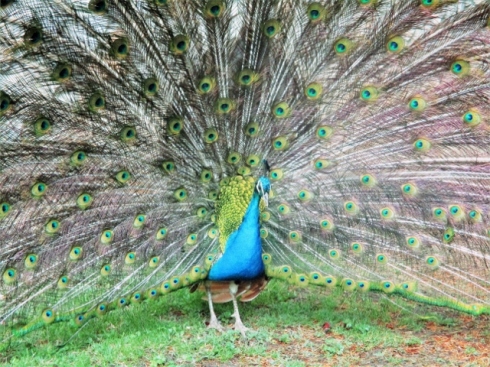 The sand and orange bricks of St Naum’s church glowed against the brooding clouds of the neighbouring mountains. We gazed from the rocky outcrop of the monastery walls to the Albanian shores across the lake. Being from Australia, it felt strange to be in a country so close to another, to be able to see it, to know the history of war and confusion between them.

We approached the church and I peeked inside. It was only around one hundred and twenty denars to enter—not a lot—but we’d already seen so many churches during our travels. Not up for another ecclesiastical visit and fee, Ion wandered. I lingered, not noticing eyes upon me. 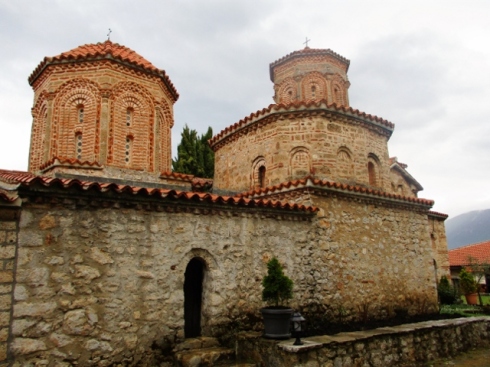 Suddenly, the bearded man at the church counter caught my eye. He spoke to me in Macedonian and waved his arms in an enthusiastic sweeping motion. Go in, he was saying. I pointed to myself, then the doorway. He nodded emphatically and swept me inside.

Old frescoes, some barely visible, lined the walls in streaks of grey. I turned into an alcove, which contained St Naum’s tomb. St Naum was a medieval saint who established the monastery in the tenth century. He was an important writer, teacher and missionary. On top of his red velvet-covered tomb rested a large framed painting of him. On the wall above, a sombre fresco depicted him on his death bed. It is said that if one presses an ear to his tomb, his heartbeat can be heard. For some reason, I did not try this.

Further inside the church, I discovered vibrant artworks and a richly decorated iconostasis. Faint chanting music played. I sat alone on one of the carved wooden seats that lined the walls and just soaked in the serene atmosphere. Suddenly, unexpectedly, tears escaped me. I felt a peace, and an overwhelming gratefulness.

Back outside, the bearded man beckoned me to him. He spoke spiritedly in Macedonian, then offered me a gift. It was a small magnet depicting the monastery. I sniffed back my tears and thanked him in Macedonian.

‘Blagodaram,’ I said. Thank you. One of the few words I knew how to say.

I caught up with Ion and told him what happened. And shortly after, when the man saw us walking together, he ushered us both into the church. Ion and I sat inside for a long time. We didn’t speak. We just listened to the music. The ambience affected us both.

When we stepped outside, the man called to me again. He rummaged through a series of concertinaed postcard pictures, stopping at a mosaic of St Naum beside a bear and an ox. ‘Miracle!’ he said in English, pointing at the picture.

He handed it to me. ‘Miracle! Miracle!’ he shouted repeatedly, pointing at me.

The man tried to speak to us in Macedonian. Ion tried speaking to him in Greek. But nothing worked. Teary again, I placed my hand on my heart; I wanted to show him my gratitude. We said our goodbyes and I left with my gifts.

‘Do you think he knows that I’m sick?’ I asked Ion.

We both felt like the man knew something we didn’t. We walked to the bus stop in silence. 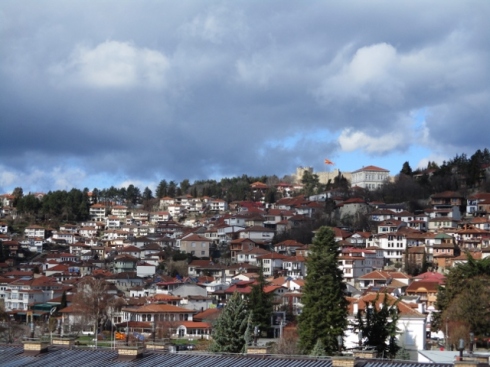 Back at our apartment in Ohrid, I searched the internet for St Naum and discovered that he was also known as a miracle man. Sick people who came to him were healed, and many still visit him for his assistance today. I also researched the mosaic image that the man at St Naum’s had given me, which depicted the miracle of St Naum, the bear and the ox.

The story goes that St Naum wanted to help a farmer plough his field, so he performed a miracle and tamed a wild bear to work beside the farmer’s ox. The bear had once terrorized the farmer and threatened the ox’s life, so St Naum put it to work.

I also came across other Slavic folktales, similar to St Naum’s bear and ox story. Variations included that the farmer’s ox had died, so St Naum replaced it with a bear. Another story substituted the bear with a wolf. One story replaced St Naum with St Martin. Perhaps St Naum’s miracles are merely folklore?

Today, many visitors to St Naum’s monastery maintain an intense belief in his healing power, and the beating of his heart from his tomb. All I can say is that St Naum’s Monastery is a truly powerful destination, and our day really did feel like a miracle. Free coffee, free entrance to the church, and a gift of hope. It was a day of magic.

And, who knows? Maybe one day I will get my miracle.

Lisa Reily is a former literacy consultant, dance director and teacher from Australia. Her poetry and short stories have been published in several journals, such as Panoply, Amaryllis, Magma Poetry, JMWW Journal, Wanderlust and River Teeth Journal’s Beautiful Things. Lisa is currently a full-time budget traveller and her writing is often inspired by her journey. You can find out more about Lisa at lisareily.wordpress.com

One thought on “The Miracles of St. Naum by Lisa Reily”