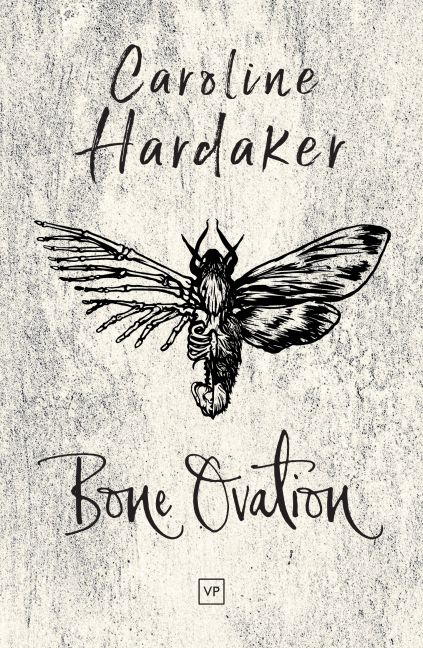 In order to write effective poetry, one must understand the power of language and the one that wields it. The same is true of all kinds of art: musicians and their instruments, artists and their paint, dancers and their body. At its best, Caroline Hardaker’s Bone Ovation is exactly that – effective storytelling that comprehends its own weight as it writes new, contemporary fables.

`Our eggs are born in our mouths, crowned around/with a wreath of tawny feathers we invent with speech,/and no expanse of crowing will whittle the chicken/into lark, or goose, or inky raven.’ These lines, from the second poem `Your Bones and My Bones are Chicken Bones’ demonstrate exactly this. Not only is Hardaker intimately knowledgeable of the construction of poetry, the ovum, and fairy-tale, but also their history, the bones. Indeed, you could make a very strong argument that this entire pamphlet revolves around the art of the tale.

Not only does Hardaker demonstrate a great dexterity of language, but also displays and immense talent for making her words look visually stunning on the page. Every letter sits exactly where she has placed it, not where it has fallen. For example, on what is ordinarily a blank page prior to a pamphlet’s commencement, we see:

Whilst this kind of writing has great strengths, as Hardaker has demonstrated, it also has great weaknesses. Despite many poems so delightfully aware of themselves in Bone Ovation, there are a handful that are not and falter into the sing-song rhythms and overtly explanatory final lines of children’s nursery rhymes. For example, from the opening of `Aparted’: `I left you to slumber/in the crypt/my oh –/my dandelion oh,/with fat skulls, nightlights/and soft crackles’, or the final line of `The Weight on My Feet’, a slightly careless seeming announcement of `I have so much more to say.’ Comparing these to the skill Hardaker demonstrates in the final line of `The Woman is Like the Picasso’: `She is facing away, but she is looking,’ one might be forgiven for assuming some of the weaker poems in this pamphlet were much earlier works, written before she had time to hone her craft.

Nonetheless, Bone Ovation is still a thoroughly enjoyable read – particularly for those amongst us who have a keen interest in the magical and mythical or perhaps in folklore. For the most part, these read as a book of dark fairy tales of the present. Though they may appear simple on the surface, much like a swan on the surface of a pond, there is a lot of busy footwork going on beneath. A great achievement and one sincerely recommended.

You can buy Bone Ovation here.

Amy Kinsman is a genderfluid poet and playwright from Manchester, England. As well as managing Riggwelter, Amy is associate editor with Three Drops From A Cauldron and runs Gorilla Poetry open mic in Sheffield. They have also been a student editor of Route 57. Their work has previously appeared in many print anthologies and web journals. Their debut pamphlet & is forthcoming from Indigo Dreams at the end of March 2018. Available here.